If your herding dog reacts badly to sporting breeds, often Labs in particular, you’re not alone.

“Herding” can mean anything from gathering a few sheep in the Scottish highlands to managing thousands of sheep in Australia to taking on an uncooperative bull in Texas to acting as a living fence in Germany. The differences each of these histories makes in the behavior of herding breeds is for another day. For now, just think of herding dogs as canine ninja warriors: highly intelligent problem solvers who are alert to everything around them, mission focused and not afraid to use force if they feel it is warranted.

Often, herding breeds do not suffer fools gladly and many may consider the “hail fellow well met” attitude of many Labradors to be foolish.

Retrievers, for their part, were bred to sit in a boat or duck blinds for hours – often in the company of new-to-them dogs and people. Labs were not bred or selected for any sort of aggression. They are, in general, social dogs who wag harder when seeing a strange dog than most herding dogs wag at their best canine friends. They are frequently “close talkers” who bumble jovially into personal space with a grin on their face that a herding dog can be just itching to wipe off. 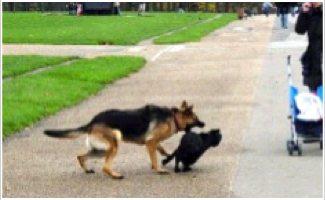 This picture, that I snapped in Kensington Gardens, London, England, is a typical example. You can tell from where the lab’s feet are that she is deep into the German Shepherd’s personal space. To the Shepherd, the lab’s proximity is like someone walking up to you and sticking their hand in your front pocket: so far beyond “rude” that you don’t have a word for it.

Here the German Shepherd roars at the Lab, mouth wide, ears sideways, hackles up, tail stiff behind while the Lab does a Matrix-like move to get out of the way. The Shepherd was simply warning – dramatically – and had no intention of actually harming the Lab. If she’d wanted to, she would have. She did not, electing to trot off seconds later.

From the Lab’s perspective, she was “just being friendly” and has no idea why the Shepherd took such offense. This “dance” happens in parks and dog runs around the world over and over again.

Who is the “bad” dog here? Neither. Both are being exactly who they are. Dogs of different backgrounds and temperaments will never understand that another has an entirely different world view. They are dogs. But, being a long-time German Shepherd person, I can tell you – that Shepherd is not a “dog park dog.” Have fun with your herding dog in other ways if yours takes such offense; skip dog parks that are often filled to the brim with energetic, adolescent sporting breeds.

AUDIO: Why Does My Herding Dog Seem to Hate Labs?

This site is produced and owned by Win Win Media LLC. Here are our legal links.

The content of this site is copyrighted.
© Copyright Win Win Media LLC.
All Rights Reserved.